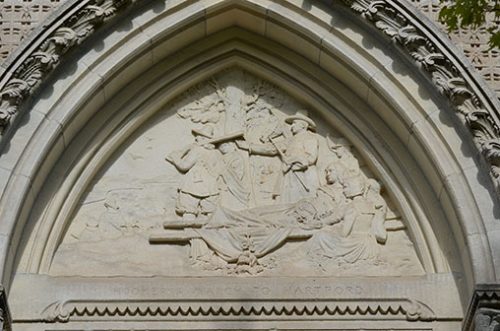 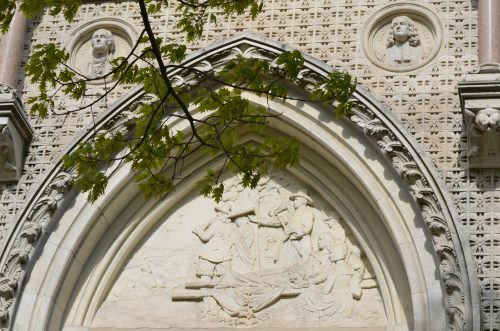 The relief tympanum above the left door of the East entrance to the State Capitol is Charles Niehaus’ 1895 interpretation of Hooker’s 1636 march through the wilderness of New England to found the Hartford settlement.

Thomas Hooker (Marfield, Leicestershire, England, 1586-1647) was a reforming Puritan minister and the founder of Hartford, Connecticut. Hooker was accused of nonformity and fled England for the Netherlands in 1631 and then left for America in 1633. Hooker assembled his followers in 1633 in Newtown (now Cambridge), Massachusetts. In May 1636 Hooker accompanied his followers to found Hartford on the Connecticut River where ample farmland was available. The colony took its name from the English county where some of Hooker’s followers had been born. Other Massachusetts colonists from Watertown and Dorchester moved in quick succession to found Wethersfield and Windsor. Beyond the borders of the Massachusetts Colony’s charter, the Connecticut settlements were challenged in 1637 by a war with the Pequot Indians. Following the conflict, the Connecticut settlements joined to form a government in May 1638. Hooker died in Hartford on July 7, 1647.