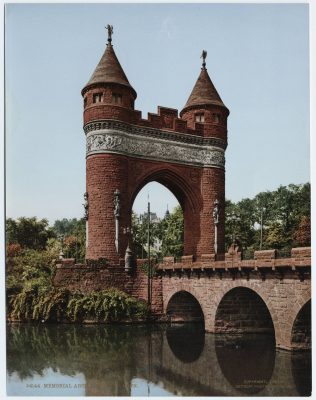 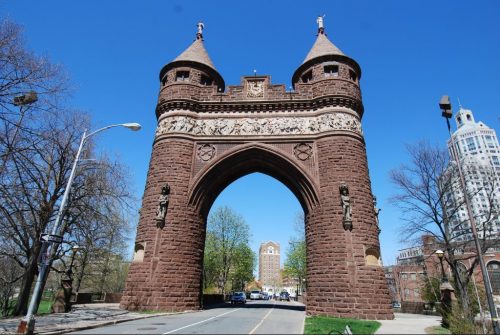 The Soldiers and Sailors Memorial Arch (1884 -1886) was constructed to commemorate the soldiers and seaman of Hartford who had died in the Civil War. Discussions and competitions for the design of a Memorial took six years. George Keller’s design for a triumphal arch was accepted. He used local brownstone and terra-cotta, and placed the arch at one end of the Ford Street bridge.

It is eclectic in style combining the elements of a Greek frieze, a pointed Gothic-Roman arch, and two Normal castle towers. The Gothic arch is 30 feet wide. Each tower is topped with a conical roof and a “finial angel.” The angels have since disappeared. Stairwells in the towers lead to inscriptions of the names of fallen soldiers. On either side of the arch is a sculpted seal of the city of Hartford. In the spandrels of the arches are shields carved with the insignia of the infantry, the cavalry, the artillery, and the naval forces. The frieze that stretches under the walkway and around the towers was sculpted by Samuel Kitson and Casper Buberl. Kitson, an English architect known for the interior of the William K. Vanderbilt House in New York, carved for the north frieze that depicts the war. The life-size figure of General Grant surveys the infantry and the cavalry as they combat the Confederates. Buberl, an associate of Keller’s, sculpted the scene of “Peace” on the south frieze. The noble female figure is portraying the city of Hartford surveys her citizens who are gathered to welcome the returning soldiers.

Six statues, added in 1894 and executed by Albert Entress, appear three on each pier below the bas-relief. They represent “The Farmer,” “The Blacksmith,” “The Mason,” “The Free Slave,” “The Student,” and “The Carpenter.” Keller decided to change a proposed figure of a merchant to one of a black man breaking the chains of bondage.

George Keller and his wife are buried in the east tower.

Inscriptions: Southeast plaque: IN HONOR OF THE MEN OF HARTFORD WHO SERVED AND IN MEMORY OF THOSE WHO FELL ON LAND AND ON SEA IN THE WAR FOR THE UNION THEIR GRATEFUL TOWNSMEN HAVE RAISED THIS MEMORIAL SouthwestDURING THE CIVIL WAR 1861–1865 MORE THAN 4,000 MEN OF HARTFORD BORE ARMS IN THE NATIONAL CAUSE NEARLY 400 OF WHOM DIED IN THE SERVICE ERECTED 1885 GEORGE KELLER, ARCHITECT CASPER BUBERL & SAMUEL KITSON SCULPTORS BOSTON TERRA COTTA CO