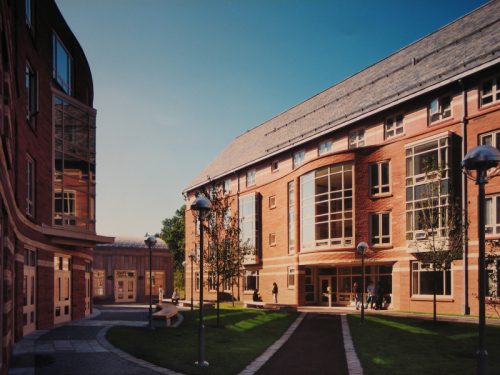 The Summit Suites dormitories was an important project from Trinity’s 1997 Master Plan.  The project broke ground in 1998 for Trinity College’s 175th anniversary and was completed in 2000 for a total of $23.5-million.

Following his modernism style, the Summit Dorms mix the past and future of Trinity College. Using the same brownstone facade, as the original Long Walk, the dorms fit in perfectly on campus. Each room is fitted with huge, light-letting windows following Rawn’s design style. In 2001 Summit was awarded the Honor Award for Design by Boston Society of Architects. At the time Rawn was just getting into building college dorms but today he is notorious for building high-class dorms around the country all following the same style.

Designed in Boston in 1997, Trinity’s campus was only an hour and half away. In an effort to connect past and present, Rawn built Summit Tower directly opposite the chapel on the other side of campus. The buildings were built on a raised plateau on the southwest side of campus facing inward towards the center of campus. The tower was built with an arched roof because Rawn wanted it to serve as “a landmark or a beacon.”

While it follows the same style of the rest of the campus, the Summit Dorms stand out. They stand out in a very good way. One can easily tell that they are the newest buildings on campus because of their modern look. The only thing that is an issue about the buildings is location. Being on the far southwest side of campus, most students do not get to embrace their beauty and aesthetic pleasure.