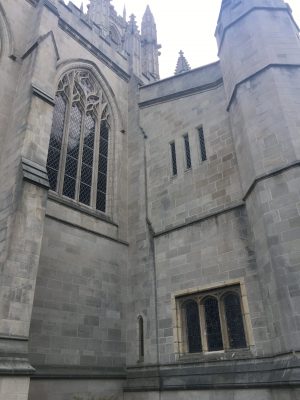 The Wolsey Window is located in the Verger’s Room off the Chapel of Perfect Friendship. Earl Edward Sanborn designed this window set in old stones that were formerly part of the kitchen window of the Whitehall Palace in London, England. The window was commissioned to be built by Cardinal Wolsey, who was an English politician and church leader in the time of King Henry VIII. The design of the window captures the spirit of the 16th century.

Viewing this window is difficult from the inside because it is not open to the general public. One can view this window from the outside on the North façade of the chapel.