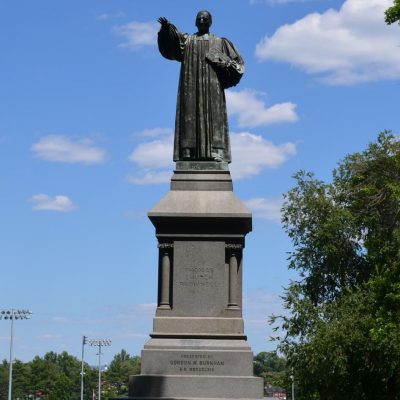 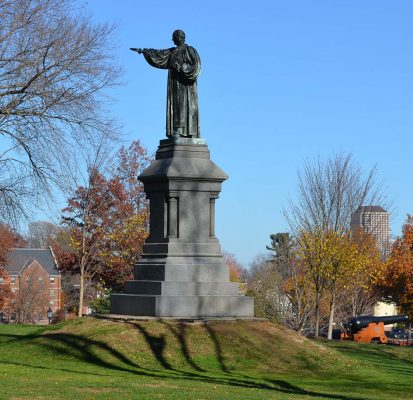 Thomas Church Brownell by Chauncey Ives is a larger-than-life bronze statue designed in Rome beginning in 1866 and cast in 1868 in Munich. The sculptor, Chauncey B. Ives was a leading American neoclassical sculptor of the generation trained in Italy and active from the 1840s through the post Civil War era. Ives’ style was a blend of neoclassical and 19th century naturalism. The mix of these two styles is evident in his design of Brownell’s statue where commonplace America meets ancient tradition.

Thomas Church Brownell (1779-1865) was the founding president of Washington College (now known as Trinity College) in 1823. He was born in Westport, Massachusetts and graduated from Union College in Schenectady, New York in 1804. He went on to teach at Union College from 1805 to 1811 before going to England to study Natural Sciences. Brownell entered the Holy Order of Deacons in 1816 and was ordained in 1818 becoming assistant at Trinity Church in New York. He became the Reverend Thomas Brownell, Bishop of the Episcopal Diocese of Connecticut, founding the original Washington College in the spring of 1823. The name was changed to Trinity College in 1845. Brownell declared himself the President, but was formally sworn in after a vote by the Board of Trustees. It was the second college in Connecticut after Yale.

Shortly after Brownell’s death in 1865, his son-in-law Gordon Burnham gave the commission to Ives to create a memorial intended for Brownell’s grave in Cedar Hill cemetery in Hartford. Ives portrays Brownell in a clerical gown with preaching tabs. His left hand holds a prayer book and his right arm is outstretched in the act of pronouncing a blessing. Ives was working from a very lifelike signed and dated portrait bust of Brownell he had made from life in 1860 and which is today in the collection of the New York Historical Society.
Ives began work in Rome during 1866 and the 10 foot 6 inch high figure was transferred to the foundry of Ferdinand von Miller in Munich, Germany to be cast in bronze in 1868. The statue arrived in Hartford in 1868 but Burnham reconsidered its destination and decided to make a gift of the massive bronze to the Trustees of Trinity College. As no pedestal for the bronze had been made, its dedication was delayed until 1869 while the college had James G. Batterson, Esq., of Hartford carve the fifteen foot pedestal of Quincy granite at the very high price of $5,000.

Finally, on November 11, 1869, the statue was ceremoniously unveiled on the College Hill campus overlooking Bushnell Park where the State Capitol now stands. When the college moved to the Rocky Ridge Campus in 1878, the statue was re-erected on the main quadrangle of the new campus.

View additional information about the statue to the right.