You are at stop #8 on the Colonial Subjects tour 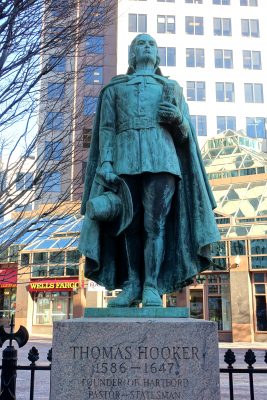 The Society of the Descendants of the Founders of Hartford commissioned this work in 1940. Hooker, a great Puritan divine, led the first settlers from Massachusetts Bay Colony to Hartford. As no paintings, drawings or written descriptions of Hooker’s appearance existed, Wadsworth created an imaginary portrait based upon her interpretation of his character as a powerful and convincing preacher. Hooker holds in his right hand a scroll. This is a reference to his sermon of 1683 in which he sets forth the principles of self government under constitutional limitations created and preserved by the people.

The statue, which measures eight feet in height, was sculpted in a highly stylized manner. Wadsworth sculpted in terms of representational forms and had each article of clothing carefully researched and approved by historians. However, the forms are abstracted from nature by the very roughness of surface revealing the evidence of modeling in clay. This creates a discrepancy between the optical fact of her interpretation and the historical accuracy of costume the sculptor carefully sought.

Robert H. Schutz designed the five and one foot high pedestal which is inscribed with a quotation from Hooker’s constitutional sermon: “The foundation of authority is laid firstly in the free consent of the people.”