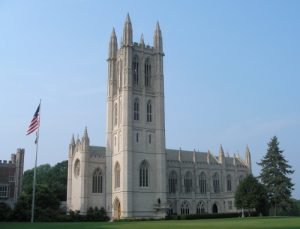 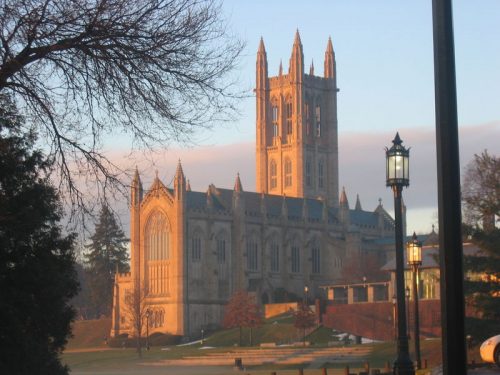 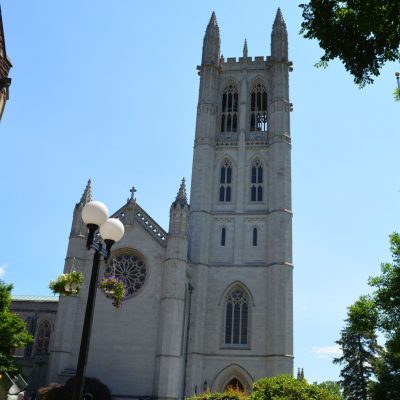 The current chapel that stands at Trinity is the third that has been built for the college.  Although the construction of the first chapel began in December of 1928, the interior was never completely finished due to the Great Depression, when its funding had been depleted.  The workers continued to construct this chapel despite their lack of pay.  It was Mather, class of 1877, who was once fined a dollar for carving his name into the chapel, that gave back for his misdoings by helping fund this construction.  Frohman’s design of the chapel depicts an entirely new vision, and that was a modern and creative Gothic revival style and was completed in 1932.

The foundation of the Chapel weighs around 5 thousand and fifty tons.  The walls of the Chapel were built with blocks of stone inside as well as outside of the chapel, using bricks in between as a stabilizer. According to the appendix, every brick that was purchased for this construction of the chapel was put to use. Going off this, a total of one thousand eight hundred and forty six bricks were laid during the making of the Trinity College Chapel.  All of the bricks within the Chapel are hidden besides the west face. Although Mather and Frohman considered using sandstone inside the building, they decided on using limestone.  Sixty five thousand cut stones from a quarry in Indiana were necessary in the construction of the Chapel and it took one hundred and eighteen railroad cars to transport these stones.