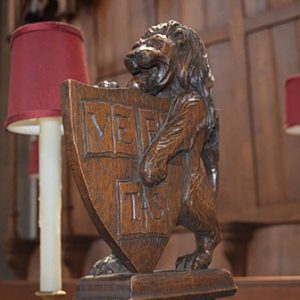 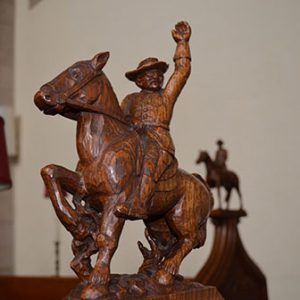 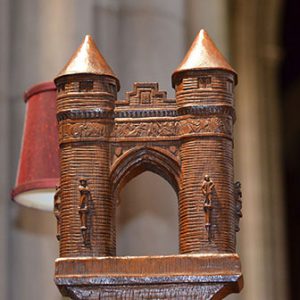 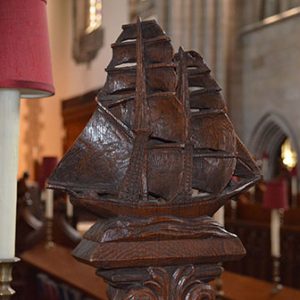 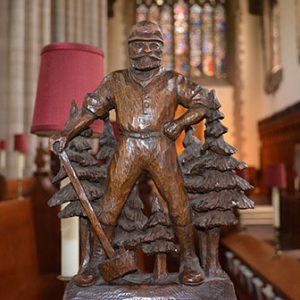 Inside the Trinity College Chapel are six-eight pews and kneel ends that consist of imagery from the life of the college, incidents from American history, and lives of people and families who have in some way been touched by Trinity.[1] As a whole, the collection represents the collective memory of the College from about 1880 to 1960.[2] The collection has many pieces, which were created over a long period of time with a variety of subject matter. J Gregory Wiggins of Pomfret, Connecticut was the direct carver of sixty-six of the sixty-eight pews and kneeler ends. This meant that he himself designed and executed the woodcarvings that persistently showcased his personality. He provided a fresh approach to the material rather than working form another meaning he designed and executed all of his work.[3] In a letter to Ogilby Wiggins expressed his desire to create humorous pieces for the “unique atmosphere” that is the Chapel. He went on to say that the act of smiling in a church should not be considered a “crime,” and that one should “embrace laughter and solemnity at the same time.”[4] His ideas were constantly discussed with Ogilby who brought out Wiggins’ greatest creative ability.

The other carvings were designed were the work of Professor John C.E. Taylor. Taylor had been the chair of the fine arts department at Trinity College for years. The designs were then carved by Erwin Dressel from the firm C.H. Dresser and Son, Inc.[5] Wiggins and Professor Taylor’s work differed in the attitude of the designs. Wiggins’ style was archaic and reflected his own character isolated from modern artistic movements, while Taylor worked in modern idiom and adapted to the needs of the chapel.[6] The work of just two artists provides a unity in the collection of pews and kneeler ends that brings the many objects and subject matter together so that they can be appreciated as a whole group.[7]

John Gregory Wiggins studied the Pomfret School in Connecticut and then at Harvard University. He went on to teach at St. Paul’s School in Concord, New Hampshire at the suggestion of a close family friend who worked at the school, Samuel Smith Dury. He was a faculty member at St. Pau’s from 1912 to 1916. There he taught Latin, Greek, and German, and coached crew.[8] In 1917 he joined the American field service in France and later became second lieutenant in the Army. Wiggins would also go on to serve in France during World War I.[9] Wiggins was not interested in competing in the competitive art world and instead he mainly produced work for churches and schools.[10] Wiggins spent many years producing pieces for the Trinity College Chapel. The first pew by Wiggins was dedicated in 1932 and he continued to create pieces until his death in 1956.[11] His style was already established before designing work for the chapel, however it was a result of his friendship with Ogilby that gave him the liberty to create freely, which allowed his creativity to grow even further. The many pieces, most of which were designed and carved by Wiggins, contain a vast display of the artist’s talents.