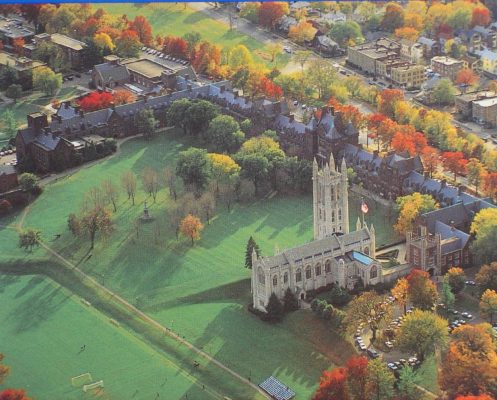 In 1872, the city of Hartford persuaded Trinity’s trustees to relocate the campus, in order to settle a dispute between Hartford and New Haven. The cities of Hartford and New Haven had been dual state capitols in the early years of Connecticut’s statehood. In 1869, the two capitol system was deemed redundant, prompting New Haven and Hartford to compete for the role of Connecticut’s state capital. To present a more attractive bid for the position, Hartford decided to offer the state a new capitol building in the center of the downtown area. The city thought the College Hill campus to be the ideal spot, and in 1872 offered a sum of $500,000 for Trinity’s relocation. Trinity faculty and students were vehemently against the sale of the campus grounds. According to a Tablet article (the school’s newspaper at the time during the time of the negotiations, the general consensus was that, “…all the Faculty, and we know by far the greater number of undergraduates are opposed to selling.” However, in 1872, Trinity was not financially secure at the time, actually being in danger of falling into debt by the end of that same year. In the interest of fiscal responsibility, the college accepted the city’s increased offer of $600,000.

After the sale was finalized, Trinity’s trustees needed to decide where the new campus would be located. Some alumni pushed to have the campus moved to New York City, and others advocated for a location in New Haven. To find a suitable location, President Abner Jackson sought out the assistance of notable landscape architect Frederick Law Olmsted. Olmsted advised Jackson to find an area that would allow the college room to grow, should the student body size increase. With this in mind the President and the campus planning committee settled on the ‘Rocky Ridge’ campus, named for its location directly up the hill from a quarry. Much like the initial sale of the old grounds, the new location was met with a good deal of criticism from students. In a particularly sardonic Tablet article from April, 1873, a student describes the new campus saying, “Truly, it was a delightful prospect: insane asylum, graveyards, stone pits, taverns, tumble down houses, and so on.” Students also worried about the distance of the new location from downtown. However, the trustees hoped that the placement of the new campus might help raise the value of the surrounding property. The Rocky Ridge campus had also been praised for its western view of Hartford and the large expanse of land available for campus growth. With these factors in mind, the board of trustees signed off on the Summit Street location in 1873

To prepare a building proposal for the new campus, President Abner Jackson had traveled to England in 1872. He met with architect John Henry Parker, a friend acquaintance, for advice. Almost immediately, Parker recommended famed architect William Burges for the job of designing the new Trinity buildings. For months, Jackson and Burges researched colleges in England, drawing inspiration from Oxford, Glenalmond College in Scotland, St. Augustine’s missionary college in Canterbury, and several other institutions in the UK. Eventually Jackson and Burges decided on a four-quadrangle layout, inspired by the traditional single quadrangle layout of English Universities. The original plan consisted of a mix of several specific buildings and styles that had impressed Jackson during his trip to England. The building was intended to be the grandest piece of cohesive architecture in the United States. Later, for the sake of affordability, Jackson and Burges cut down their campus plan to a three quadrangle structure.

By 1874, when a plan for the campus was ready to be finalized, President Jackson fell ill and died suddenly. Unfortunately for the Burges plan the college’s new president, Thomas Ruggles Pynchon, and the board of trustees decided on a further reduced plan in order to save money. With the assistance of architect Francis Kimball and Frederick Law Olmstead, a new plan for the ‘Long walk’ version of Campus (consisting of Jarvis Northam and Seabury) was finalized.