You are at stop #5 on the Civil War tour 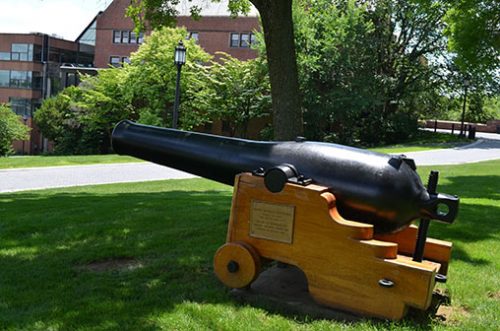 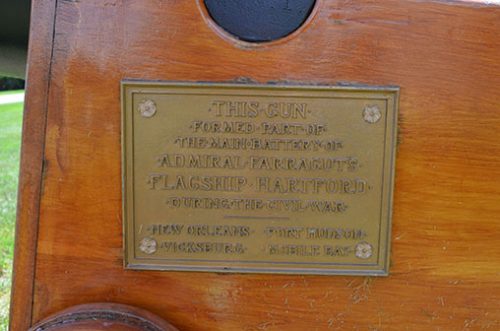 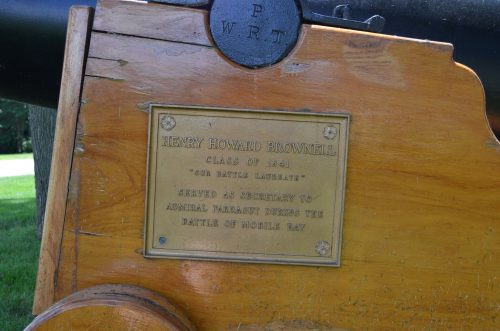 The story of the two cannons that sit overlooking the lower long-walk and athletic playing fields at Trinity College, began when The Memorial Field House was dedicated on February 12, 1949. The building commemorated 70 Trinity men who sacrificed their lives during World War II. The welcoming of the building came with a pleasant ceremony, Brigadier General Archie J. Olds of the US. Air Force gave the principal address and The Connecticut National Guard filled the room with music. 1,500 people were in attendance and of them were 100 Trinity R.O.T.C cadets and 500 alumni who had served during the war. The following year in 1950, President Funston communicated with the City of Hartford and urged the donation of two cannons to the campus of Trinity College.

The original Memorial Cannons were from the 1858 main armament of the steam-powered sloop-of-war, the U.S.S Hartford, Admiral David G. Farragut’s flagship at the Battle of Mobile Bay in 1864. His famous order on the ship is remembered, “Damn the torpedoes, full speed ahead!” The donation commemorated the 100 Trinity men who served in the Union and Confederate forces. The cannons were placed facing east toward the city of Hartford, directly above the lower long-walk, and behind the statue of Bishop Brownell. In 1994 the Navy League refurbished and borrowed the cannons to mount on authentically designed carriages for display in Groton, Connecticut to celebrate the second U.S.S Hartford, an attack submarine. The cannons serve as a remembrance and a memorial to the Trinity men who gave their lives, and they remain an important feature when walking through campus today.