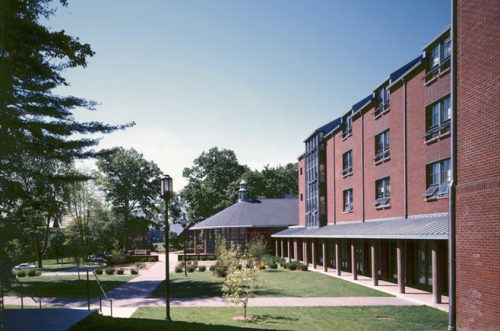 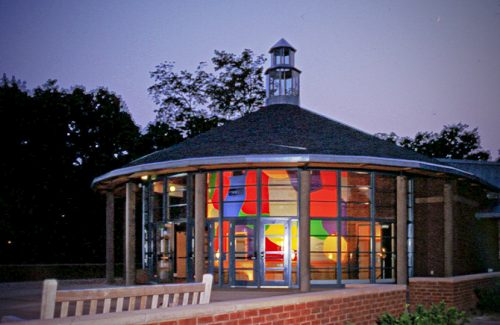 Vernon Social Center and the adjacent dormitory, located at 114 Vernon Street at the northern edge of the Trinity College Campus, was completed in 1997 by the internationally known and Hartford-based architect Tai Soo Kim. The Social Center is a long single-story structure with a red brick, glass, and metal exterior terminating in a dramatic round pavillion whose walls are painted with a bold Sol LeWitt Wall Drawing.

The double-walled concave and convex interior walls of the eastern entry pavillion form two concentric circles. It was the architect Tai Soo Kim’s idea that the building could be brought to life by a dramatic work of art. Sol LeWitt, Hartford native and world renowned conceptual artist, magnanimously created, as a favor to Trinity art professor Alden Gordon, his “Wall Drawing #849, Irregular Blobs of Color” . The artist not only wanted to enhance his friend Tai Soo Kim’s building but also to acknowledge his own attachment to this neighborhood where he grew up and near the cemetery where his parents are buried. Facing both outward and inward, the design can be seen through the glass wall even when the building is not in use. The scheme is playful and doubles-down on the curving walls with irregular color shapes which seem to dance. Wall Drawing #849 was executed in part by Trinity College students and alumni.

The original 1997 interior configuration was a 7,500 square foot multipurpose room with an open floor plan featuring a raised stage at the west end and a rounded glass-walled, audience entrance at the east end. The ceiling features exposed, natural-finish wooden beams and steel rod trusses that support a simple pitched roof with three metal-clad dormers facing south.

The open floor plan was extensively remodeled in 2013 with permanent dividing walls and seating designed by Tecton Architects. The interior reconfiguration changed the space from a flat floor theater and dance space into an extended sequence of smaller, more intimate gathering nooks and flexible areas.

Extending from the northern side of the Social Hall is a four story, 44,000 square foot residence hall also designed by Tai Soo Kim.