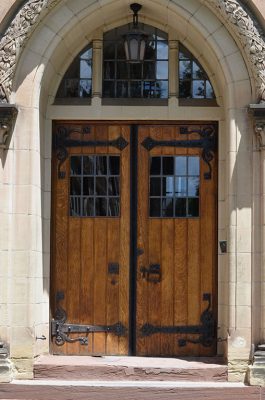 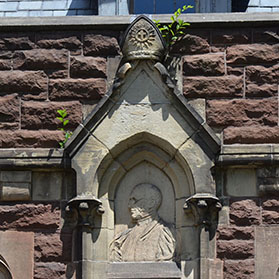 Benjamin Wistar Morris’ Williams Memorial Building was built in 1914 to provide a new library for Trinity College. The Williams Memorial was the gift of John Pierpont Morgan, a trustee of Trinity College for 27 years. Morgan donated the building in memory of his friend, the Rt. Rev. John Williams, the fourth president of Trinity College (1848-1853). Morgan had come to Hartford in October 1912 to visit his cousins, Francis and James J. Goodwin, both Trinity Trustees. The cousins first visited the Wadsworth Atheneum to inspect progress on the Junius Spencer Morgan wing under construction. They then visited President Luther at Trinity who secured Morgan’s gift of $100,000 for the new library. Morgan chose the architect, Trinity graduate Benjamin Wistar Morris ’93, of the New York firm of La Farge and Morris who were the architects of the Junius Spencer Morgan Wing of the Wadsworth Atheneum. J. P. Morgan died in Rome in March, 1913 and never saw the buildings he sponsored in Hartford completed. But his son continued the family philanthropy, giving an additional gift of $150,000 for the Library in 1916. The building was dedicated in 1914 and completed in 1915.

The building was joined to the northern end of the Long Walk buildings of 1876 by an arch which employed the Rafael Gustavino fireproof terracotta tile arch system with its distinctive herringbone pattern. The large double-height Gothic hall on the upper level at the East end of the building served as the college library. The president’s office was on the ground floor with windows that looked out onto the quadrangle.

At the time of design, the Williams Memorial Building was conceived to be a return to the original Burges Plan for Trinity. Turning eastward at right angles to Jarvis Hall, Williams Memorial was the beginning of the creation of an open quadrangle. The subsequent addition of the Trinity College Chapel in the same line, though in an inconsistent style and materials, was a recognition of Burges’ plan. The much later addition of the Downes Memorial Arch in brick and out of line with the geometry of Williams Memorial completed the closure of the Northern side of the quadrangle.