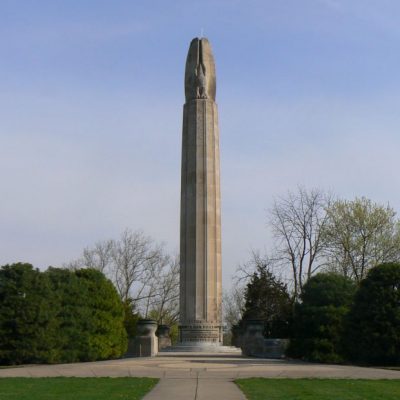 In New Britain, Connecticut, “Civic leader and businessman, Robert Alexander Long, formed the Liberty Memorial Association.”  The association consisted of “a group of men and women who would decide what kind of memorial to build” for the town’s veterans. However, choosing the appropriate architect for a $2 million project was a difficult task. In fact, “Long wanted to satisfy many people so he, along with other city leaders, decided to hold a competition.” Out of “eleven architects [who] submitted entries, [the] winner was Harold Van Buren Magonigle, an architect from New York City.” Under his architectural influence, the monument would be dedicated on September 22, 1928 accompanied by thousands of spectators. Its 90-foot stone shaft topped by a sculpted double eagle, has stood majestically at Walnut Hill Park since its dedication.

Harold van Buren Magonigle’s World War I Monument provides a good example of art deco and modern style. According to Maureen Robins, author of World War I Memorial, “His design was grand.[: an] eternal flame called the Flame of Inspiration would burn on top of a tower.” Harold’s ideas were greatly inspired by his original work, the World War I Monument in Kansas City. The artwork there mirrors its cousin in Walnut Hill Park, New Britain. The lead carver for the monument was John Donnelly Inc. Later, Perry’s services to New Britain would earn him recognition as “Designer of Public Memorials and Buildings” upon his death at the age of 67.

The striking ninety-foot tall obelisk in New Britain is dedicated to World War I and remembers 123 New Britain servicemen who lost their lives. The monument stands atop Walnut Hill and can be seen from miles away. The column is made of stone and is capped with two sculpted eagles. There are 12 flutes that surround the column. The plaque at the base reads “MDCCCCXXVII (1927). The City of New Britain here records with pride that of her citizens, more than four thousand served in the World War 1917-1918.” The other plaque states the dedication as “To her sons who gave their lives to their country, their names are here inscribed. Their memory lives in the heart of a grateful city.”

At the foot of the monument are garlands of laurel and oak to symbolize one of victory and the other courage and strength. Surrounding the monument are semi circular walls. The walls are adorned with individual bronze plaques for each of the 123 servicemen that read their name, rank, unit affiliation, and date of death. The city of New Britain commissioned the American architect Harold Von Buren Magonigle to design the monument, which was then dedicated on Saturday, September 22, 1928 at 4pm. John Donnelly, Inc carved the memorial from stone founded by The Gorham Manufacturing Company. The contractor was The Perry Brothers and Central Oolitic Stone Company. They broke ground on the monument on April 11, 1927.

Inscriptions: MDCCCCXXVII THE CITY OF NEW BRITAIN HERE RECORDS WITH PRIDE THAT OF HER CITIZENS MORE THAN FOUR HUNDRED SERVED IN THE WORLD WAR 1917-1918 (north side of the base), TO HER SONS, WHO GAVE THEIR LIVES TO THEIR COUNTRY IN THE WORLD WAR THEIR NAMES ARE HERE INSCRIBED THEIR MEMORY LIVES IN THE HEART OF A GRATEFUL CITY (south side of the base)

Magonigle is known for similar monuments in Kansas City and New York City. In the 1920s and 1930s a fashionable style of design and interior decoration arose in both Europe and America. It became known as Art Deco after its later revival in the 1960s. The style originated in luxury materials such as ivory, jade, and lacquer. However, more reasonable materials were implemented for the style around the 1930s as a result of the Great Depression but also for the mass production of objects. Scholars have credited movements of art earlier in the 20th century as influence for Art Deco: the geometry of Cubism, bold colors of Fauvism, and the machine forms of Constructivism and Futurism. The World War I Monument is a perfect example of this strong style that incorporated stream lined forms.

The memorial was incredibly popular. In an article in the New Britain Herald on September 22, 1928 they described thousands of people coming to see the monument. This tribute to the 123 servicemen who gave their lives to World War I combines private aspects of a cemetery with the public nature of sculpture. At the time of its creation, memorial monuments were a new concept in the United States. It was not until after World War II and the great affect of the Holocaust that public sculpture for memorial purposes gained speed in America.