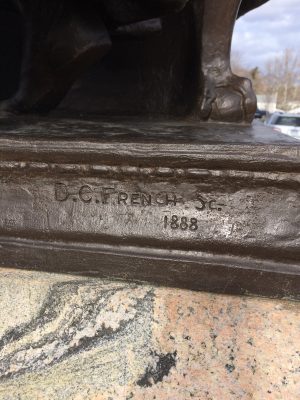 The statue at the American School for the Deaf in West Hartford, CT depicts Doctor Gallaudet and His First Deaf Mute Pupil. It was designed in 1888 by artist Daniel Chester French and was originally cast in 1889 for the campus of Gallaudet University in Washington D.C.. Thomas Hopkins Gallaudet, a pioneer in education for the deaf,  founded the school in 1817 in the city of Hartford, Connecticut. Gallaudet is shown with a small girl sitting on his lap showing her how to fingerspell the letter “a”.  The child is Alice Cogswell, his first pupil.  The artist, Daniel Chester French (1850- 1931), captures the strong emotional connection between student and teacher as Alice looks up to Gallaudet with awakening understanding. Gallaudet’s educational methods were a breakthrough in social advancement for the hearing impaired. The sculpture is a symbol for a new beginning of teaching and learning for deaf children in America. Daniel C. French was a master of natural representation of the human figure. French is best known for his marble statue of Abraham Lincoln in the Lincoln Memorial in Washington, D.C.

The American School for the Deaf was founded in 1817 in Hartford in a temporary home on Main Street. Its second campus was on Asylum Street and gave its name to the street. Between 1919 and 1921 the American School for the Deaf moved from its Hartford campus in Asylum Hill to a new campus in West Hartford.  A committee ordered a replica of the 1889 original bronze be cast in 1924 for the West Hartford campus to replace the Gallaudet Obelisk which had memorialized the founder at the Asylum Hill campus.