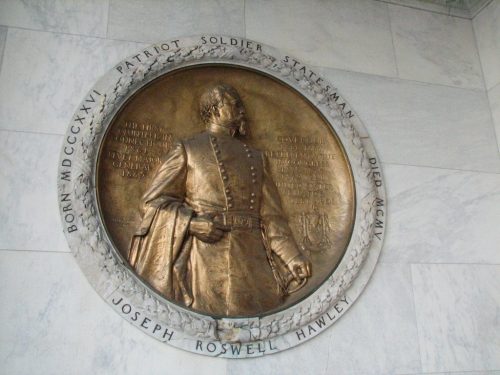 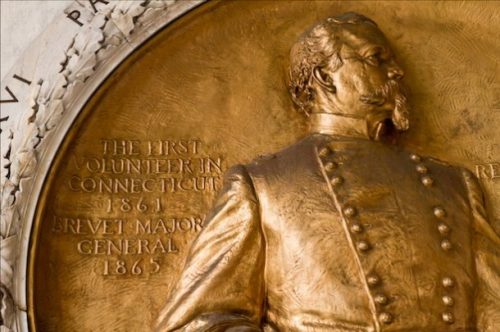 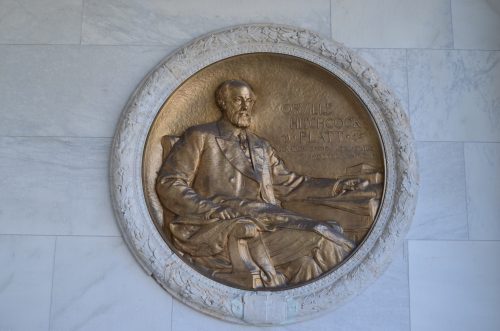 On October 18, 1912, memorials to Joseph Roswell Hawley, done by Herbert Adams, and another to Orville Hitchcock Platt, done by Hermon Atkins MacNeil, were dedicated at the State Capitol in Hartford. The large half-length relief portraits were ordered in 1908 by a special memorial committee of the Connecticut State Commission. Each bronze medallion depicts an above life size figure in high relief encircled by a marble foliate border.

Statesman and Civil War General, Hawley (1826-1905) is seen in three-quarter length, dressed in military uniform, his left hand grasping the hilt of his sword. His wrinkled face and idiosyncratic features are shown in profile, with a solemn expression and a concentrated gaze suggesting his sense of purpose and commitment. The animated surface and distinctly human treatment of character reflect Adam’s Paris training. To the left of the central figure of Hawley is a list, including dates, of his military service; to the right, a list, including dates, of political offices held. As Hawley served as Governor of Connecticut from 1866-1867, the Arms of the State appears under the list of political offices. Around the outside of the medallion’s foliate border, Hawley’s full name, birth and death dates, and the words “Patriot Soldier Statesman” are inscribed.